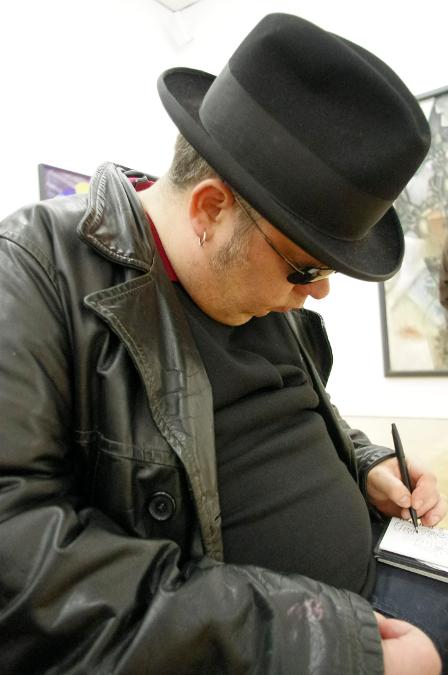 "At the age of 14 I had a brain haemorrhage  which resulted in the loss of my drawing right hand. I never regained the use of my right side but relearned my natural artistic talent through my left hand. Since then I have been drawing, creating and painting my reflections on the world."

Born in 1963 (Camberwell,London) Billy Weston has been developing his unique style of art since his childhood.

A brain haemorrhage as a teenager devastated Billy, resulting in a long journey to rebuild his life after the loss of use in his right side and dependency on re-learning through his left side. Billy has since been through a journey through life living in South-East London and making art.

In the past Billy has volunteered and participated with the Bromley-By-Bow centre, Cooltan Arts, Outside In, Southwark Resource centre and the Urban Art fair.

From years of practice, Billy is now able to use his talents to express himself at a masterful level, without much planning and work in a fluid way. His drawings and paintings are often cerebral and come directly from his subconscious.Billy is influenced by the artwork of Robert Crumb, HR Geiger and low-brow comics and alternative culture.

He is currently working on his ceramics at a ceramics studio in central London, painting at home, and drawing wherever and whenever he can – usually at a cafe. You might see him in the West-End of London drawing in one of the capital’s many cafes.

2018 Outsider Art Conference screening of 'Working in A Parallel dimension'

2014 'The Inner Self: Drawings from the Subconscious/CGP London/Outside In Link

And many more unremembered...